Calvin Klein is no stranger to stirring up controversy. With their history of overtly sexual advertisements – mainly during the ’90s, the brand truly takes “sex sells” to heart when it comes to promoting their image. Given their recent surge in popularity, primarily among Millennial consumers, it seems like their controversial tactics may be working.

One of the keys to Calvin Klein’s success is directing their advertising efforts towards Millennial consumers through collaborations with pop culture icons such as Kendall Jenner, Justin Bieber, and Nick Jonas. However, the brand is currently under fire for their newest ads, that many argue are overly explicit and provocative.

In one photo, 23-year-old Danish actress Klara Kristin is seated on a couch, legs open, and the copy reads, “I seduce in #mycalvins.” Probably the most controversial of the campaign is the up-skirt shot of Kristin, accompanied by the copy that reads, “I flash in #mycalvins.” Outraged by these racy advertisements, people are turning to social media to express their concerns: do the ads promote and perpetuate misogyny, peeping toms, pornography, sexual harassment and rape culture? Many would agree that they do. 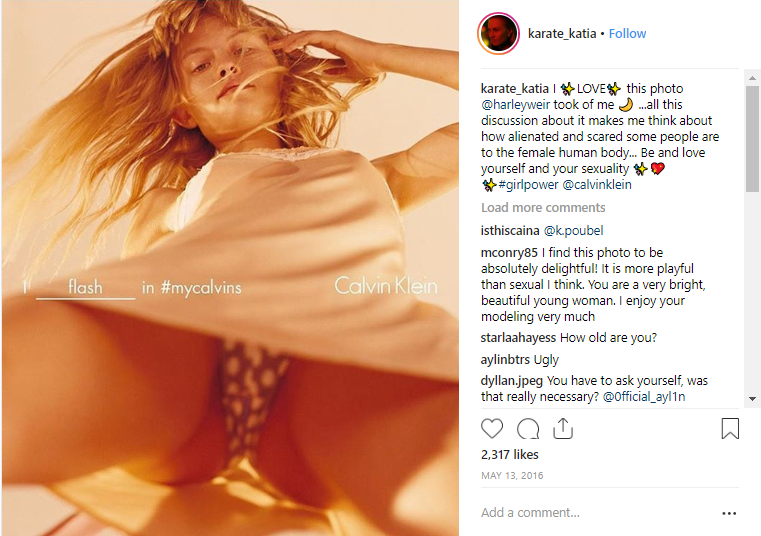 However, some Millennial consumers argue that the ads express a unique empowerment through the first person point of view. The line, “I ___ in #mycalvins,” conveys a sense of autonomy that gives the subject a voice and the power of decision. Kristin actually defended the photo in an Instagram post with the caption, “I love this photo @harleyweir took of me… all this discussion about it makes me think about how alienated and scared some people are to the female human body. Be and love yourself and your sexuality #girlpower.” Kendall Jenner has also voiced her opinion on the campaign. In behind-the-scenes footage that Calvin Klein posted on their Instagram, Jenner answers how she would define a strong woman: “I think a strong woman is independent, don’t need no man, can like walk into a room by herself and not be bothered and can go anywhere by herself and not need a million people around her–I think that’s a really strong woman.”

Amidst the heated debate, people cannot seem to agree on whether these ads are positive or negative. However, I believe that they’re neither one nor the other, but instead more complex in nature. On one hand, they can certainly serve as statements of empowerment and bodily ownership. Calvin Klein may be trying to make the statement that society should not be afraid to openly express sexuality. However, we cannot disregard in our analysis the historical objectification and hypersexualization of women in the media and its effect on society today. There’s the running critique that some women take their objectification upon themselves and mistake it for empowerment. I agree with this opinion to some extent, but I think the key here is balance. Yes, women can certainly feel powerful and confident by expressing their sexuality and celebrating their bodies. However, we should also feel empowered by the many other facets of our identities, because we are more than just sexual beings.